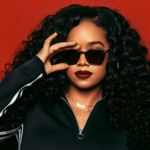 Since RCA released her self- titled EP, she has been the topic of conversation among peers and fans. The unidentifiable artist has been taken the industry by storm since the release of a 7-track project under a mysterious new artist moniker, H.E.R. With very little promo around the project, she received praises from music industry heavy weights such as Alicia Keys, Brandy, Wyclef Jean, Bryson Tiller and Rihanna.