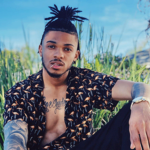 Tone Stith is a rising star on the R&B scene whose hard work and craft is not to be overlooked. Influenced by his parents at a young age, Tone began playing the drums, started learning how to use production software, and in church began to embody the talent of a singer. Fast forward to 2015, Tone’s career takes a turn for the better as he proves his worth co-writing Chris Brown’s platinum record “Liquor.”

Although Tone’s music is futuristic, there are elements that will give you a more classical feel of 90s R&B that we love. While continuing to work on his craft, Tone Stith had the opportunity to team up with H.E.R. on the, “I Used to Know H.E.R.” tour, preforming in front of sold out crowds, delivering an experience for Tone like none other. Using that experience as motivation, Tone is working on a new funky, soul type of sound that will help him tell the tales of love through the good and the bad.