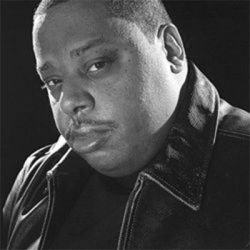 Every business thrives on truth. As Founder and C.E.O. of MBK Entertainment, Jeff Robinson’s commitment to unabashed honesty underpins the success of some of the most influential artists of the past three decades. Under his watch, company alumnus Alicia Keys transformed from a quiet teen in The Bronx into an icon. Meanwhile, his current roster spans GRAMMY® Award winner H.E.R., multiplatinum singer and songwriter Tiara Thomas, and buzzing stars Lonr., Tone Stith, Maeta, and more. Simultaneously, he continues to produce projects for film and television with credits such as the award-winning festival favorite Pariah. Forbes has profiled him, while Crain’s New York Business named him among its “40 Under 40.” Out of hundreds of nominations, artists under his advisement have received dozens of top honors at the GRAMMY® Awards, American Music Awards, Billboard Music Awards, NCAAP Awards, MTV VMAs, and BET Awards, to name a few.

However, his sustained success stems from an uncanny ability to tell it like it is. “I’m 100% honest, because we’re in business,” he affirms. “As an artist, everybody tells you what they think you want to hear. The fear is, ‘If my client gets upset, I’ll lose my job’. There’s no fear like that with me. I want every client to say, ‘He can be a little rough sometimes, but he’s always straightforward’. It’s what keeps everyone on top.”

Growing up in Harlem and The Bronx, he adopted this edge as a kid. Dad officially worked for the Post Office and unofficially ran numbers. With mom juggling jobs, he often babysat Jeff and his five siblings—in the local bar. During those days, the jukebox immediately transfixed Jeff.
“It played everything from Marvin Gaye to Sam & Dave,” he recalls. “I remember watching the old guys dance in their shiny shoes and dress pants. I got a whole education in music and fell in love with blending styles.”

For five or ten dollars, he began making “slow jam tapes” for kids in the neighborhood. Each compilation soundtracked an entire date night and “told a story.” Upon accepting Jesus Christ, mom quit drinking and brought all of the children to church weekly where Jeff discovered gospel music and the likes of Andraé Crouch, Vanessa Bell Armstrong, and more. In between playing basketball for Lehman College, he dabbled in the streets. A few bad choices later, he found himself exiting a courthouse one day when he ran into an old college buddy Kurt Woodley. Notably, Kurt worked at the groundfloor of the legendary Uptown Records and invited Jeff to a studio session for Mary J. Blige’s What’s The 411?

Inspired and energized, he dove headfirst into the business. Tutored by Kurt and late Uptown Records founder Andre Harrell, he oversaw the career of Casserine known for “Why Not Take All of Me?” Collaborating with Warner Bros. Records at the time, he built longstanding friendships with colleagues and mentors like Benny Medina and Peter Edge. In 1995, his brother invited him to the Boys & Girls Club to hear a young prodigy who happened to be Alicia Keys. He spent the next five years cultivating her talents and encouraging her to progress as a songwriter. Rather than perform for labels individually, Jeff arranged back-to-back showcases where rival reps ran into each other, sparking a historic bidding war. As the story goes, Alicia sold tens of millions of records, garnered 14 GRAMMY® Awards, made history many times over, and performed at The Great Wall of China, at The Roman Colosseum, and in Cape Town for a storied HIV/AIDS benefit during her fifteen-year tenure as an MBK client.

Along the way, Jeff elevated the careers of Elle Varner, SWV, K. Michelle, Gabi Wilson, and Tyrese. He also developed another budding talent H.E.R. At just 11-years-old, she caught his attention, and he eventually introduced her to the masses. The enigmatic powerhouse took home “Best R&B Album” at the 2019 GRAMMY® Awards for H.E.R. and achieved numerous multiplatinum certifications. Beyond H.E.R., he has built a formidable stable as Lonr., Maeta, Tiara, and more consistently make waves.

Extending his reach, he served as executive producer for 2011’s Pariah. Among dozens of nominations, the film took home “Outstanding Independent Motion Picture” at the NAACP Image Awards and picked up the “Excellence in Cinematography” Award at the Sundance Film Festival.
Marking a full circle moment, he signed five-piece gospel ensemble Livre’ and primed their chart success with the 2016 debut, JERICHO: Tribe of Joshua. The record produced a string of hits on various Billboard charts, including “Amazing” and “I Will Be Alright.”
“Gospel music formed who I am today,” he smiles. “Nobody was closer to me than my mother, and she instilled faith in me. To have success with a gospel project was one of my biggest achievements, if not the biggest.”

In the end, Jeff’s honesty will resound through the music business and culture for a long time to come.
“We have to continue to grow,” he leaves off. “I have a very creative mind, so I’m always thinking. No one ever has to know who I am. I want the artists to make an impact. When listeners see a little bit of themselves in a song, it gives them a voice. That’s what I want them to take away. I’m on my legacy quest now.”