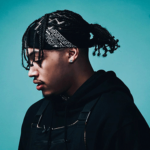 Born and raised in Los Angeles, California, growing up on the Northeast Coast, Lonr is a self-taught musician and producer that got his shot in the music industry working with H.E.R. Landing two Grammy nominations for his work on H.E.R.’s material, Lonr made his solo debut with “A.M.” and “Safe Zone.” Lonr’s style comes at you as R&B influence with a twist of alternative hip-hop and soul, some would say it reminds them of Post Malone, or the late Juice Wrld. Despite the comparisons, Lonr continues to strive in his own direction that can be considered a genre of his own as he works to perfect his craft.

Since dropping his first two singles, Lonr has found himself on tour with Souly Had and YBN Cordae.  Proving to be an immediate crowd pleaser, Lonr’s tight knit fanbase has skyrocketed him to where he is today. The first quarter of 2020 included another single, “Make the Most” featuring H.E.R., followed by Lonr’s 7 track EP called “Land of Nothing Real”, which is what Lonr stands for. Land of Nothing Real tells the tale of why he considers himself a loner, his wild style personality, and his views on how you should treat love. Lonr continues to work hard building his fanbase hoping to leave his mark on the music industry.